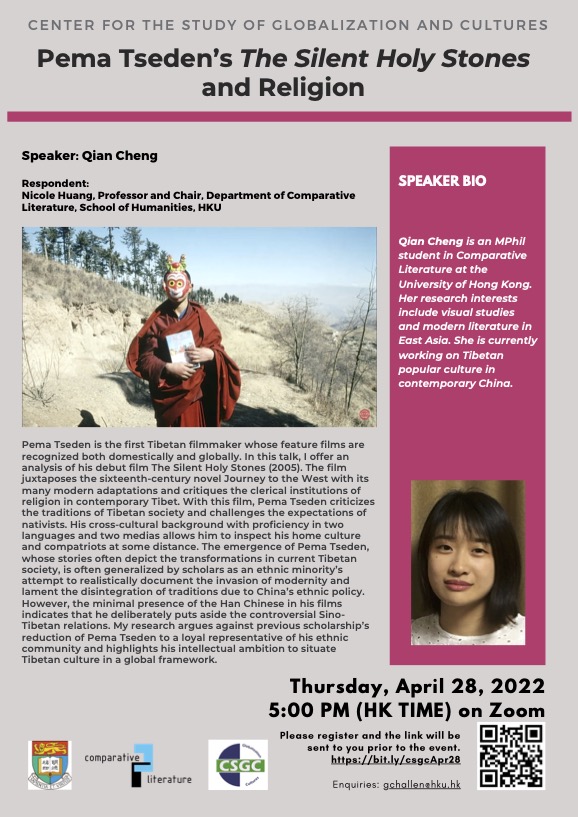 Pema Tseden is the first Tibetan filmmaker whose feature films are recognized both domestically and globally. In this talk, I offer an analysis of his debut film The Silent Holy Stones (2005). The film juxtaposes the sixteenth-century novel Journey to the West with its many modern adaptations and critiques the clerical institutions of religion in contemporary Tibet. With this film, Pema Tseden criticizes the traditions of Tibetan society and challenges the expectations of nativists. His cross-cultural background with proficiency in two languages and two medias allows him to inspect his home culture and compatriots at some distance. The emergence of Pema Tseden, whose stories often depict the transformations in current Tibetan society, is often generalized by scholars as an ethnic minority’s attempt to realistically document the invasion of modernity and lament the disintegration of traditions due to China’s ethnic policy. However, the minimal presence of the Han Chinese in his films indicates that he deliberately puts aside the controversial Sino-Tibetan relations. My research argues against previous scholarship’s reduction of Pema Tseden to a loyal representative of his ethnic community and highlights his intellectual ambition to situate Tibetan culture in a global framework.

Qian Cheng is an MPhil student in Comparative Literature at the University of Hong Kong. Her research interests include visual studies and modern literature in East Asia. She is currently working on Tibetan popular culture in contemporary China.