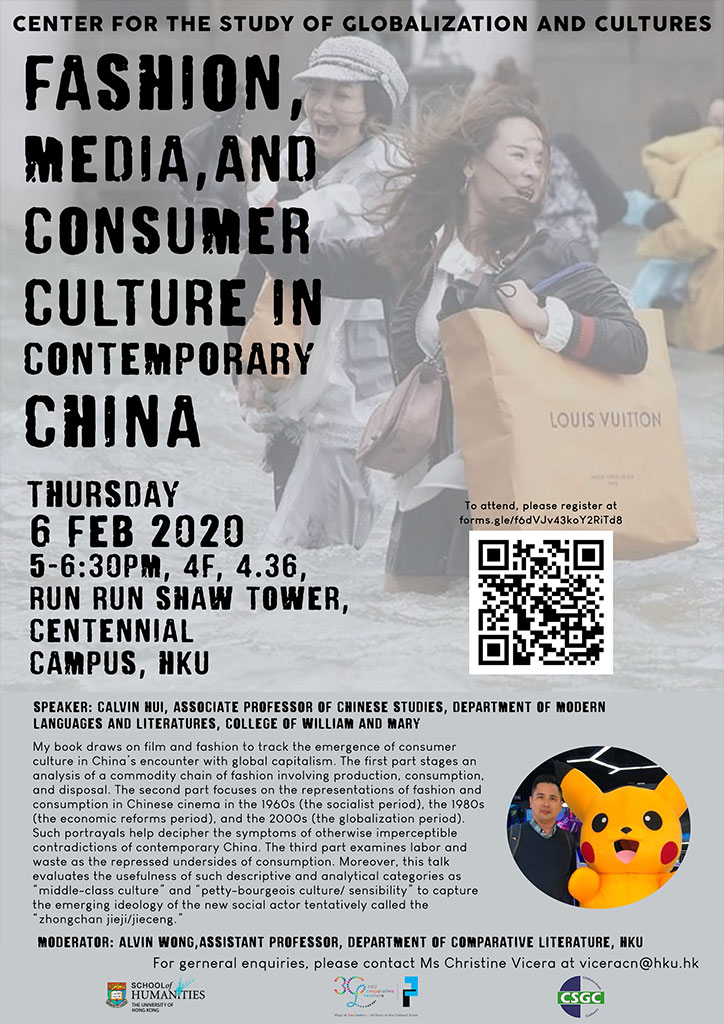 Abstract:
My book draws on fiction film, documentary film, and fashion to track the emergence of middle-class consumer culture in China’s encounter with global capitalism. The first part stages an analysis of a commodity chain of fashion involving production, consumption, and disposal. The second part focuses on Chinese cinema in the 1960s (the socialist period), the 1980s (the economic reforms period), and the 2000s (the globalization period). By analyzing selected fashion films, I argue that the cinematic representations of fashion, gender, and consumption are a productive site for deciphering the symptoms of otherwise imperceptible political-economic, social, and historical contradictions of contemporary China. These depictions can also be seen as a screen onto which the emerging middle-class desires and fantasies are projected, worked out, and negotiated. The third part discusses labor and waste as the repressed undersides of consumption in Chinese documentaries and ethnography. This talk evaluates the usefulness of such descriptive and analytical categories as “middle-class culture” and “petty-bourgeois culture/sensibility” to capture the emerging ideology of the new social actor tentatively called the “zhongchan jieji/jieceng.” My research demonstrates the relevance of cultural studies, western Marxism, and post-structuralist theory in investigating contemporary Chinese popular, media, and visual cultures.

About Calvin Hui:
Calvin Hui is a recipient of 2019 American Council of Learned Societies (ACLS) fellowship, one of the most prestigious fellowships in the humanities in the U.S. academy. He is a tenured Associate Professor of Chinese Studies at the College of William & Mary, the second oldest institution of higher learning in the United States. In 2013, he received his PhD in Literature at Duke University. His first book focuses on fashion, fiction films, documentary films, and consumer culture in post-socialist China. His second research project concerns contemporary China’s copycat cultures. His email is: kchui@wm.edu.