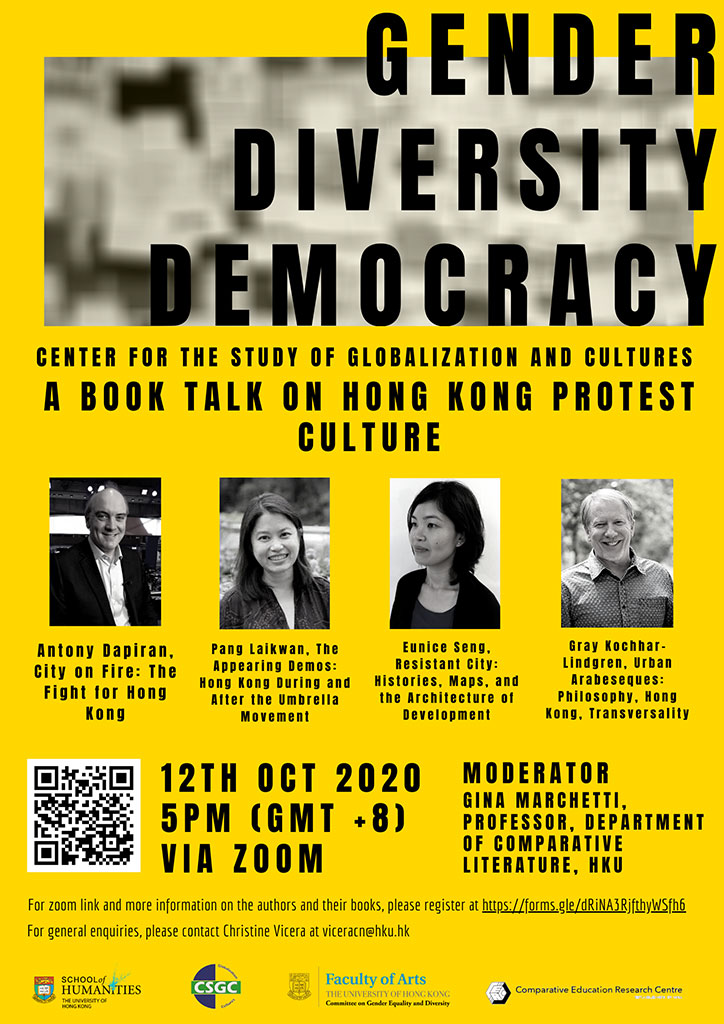 Date: Monday, 12 Oct 2020
Time: 5 PM (GMT +8)
Speakers: Antony Dapiran, Pang Laikwan, Eunice Seng, Gray Kochhar-Lindgren
Please register at https://forms.gle/PF7E4sRka7mmcMyE8 and the Zoom link will be sent to you a day before the event.

Antony Dapiran, City on Fire: The Fight for Hong Kong
Through the long, hot summer of 2019, Hong Kong burned. Anti-government protests, sparked by a government proposal to introduce a controversial extradition law, grew into a pro-democracy movement that engulfed the city for months. Protesters fought street battles with police, and the unrest brought the People’s Liberation Army to the doorstep of Hong Kong. Driven primarily by youth protesters with their ‘Be water!’ philosophy, borrowed from hometown hero Bruce Lee, this leaderless, technology-driven protest movement defied a global superpower and changed Hong Kong, perhaps forever. In City on Fire, Antony Dapiran provides the first detailed analysis of the protests, and reveals the protesters’ unique tactics. He explains how the movement fits into the city’s long history of dissent, examines the cultural aspects of the movement, and looks at what the protests will mean for the future of Hong Kong, China, and China’s place in the world.

Pang Laikwan, The Appearing Demos: Hong Kong During and After the Umbrella Movement
In the context of Hong Kong and its Occupy movement, this book deals with three sets of related questions. First, how can we understand the occupiers as autonomous and nonconformist but also as committed to a movement with meanings that reside mostly in its collective dimension? Second, what kinds of intersubjective relations were formed during the Occupy movement that helped individuals to construct their own political subjectivity? Third, can we learn from Hong Kong’s struggles and reconsider the city as a viable unit to formulate a political community? Together, these questions form a coherent attempt to explore participatory democracy not only in Hong Kong but also around the world.

Eunice Seng, Resistant Cities: Histories, Maps and the Architecture of Development
This vivid book is an inquiry into the stagnation between the development of architectural practice and the progress in urban modernization. It is about islands as territories of resistance. It is about dense places where multitudes dwell in perennial contestations with the city on every front. It is about the histories, tactics and spaces of everyday survival within the hegemonic sway of global capital and unstoppable development. It is preoccupied with making visible the culture of resistance and architecture’s entanglement with it. It is about urban resilience. It is about Hong Kong, where uncertainty is status quo.
This interdisciplinary volume explores real and invented places and identities that are created in tandem with Hong Kong’s urban development. Mapping contested spaces in the territory, it visualizes the energies and tenacity of the people as manifest in their daily life, social and professional networks and the urban spaces in which they inhabit. Embodying the multifaceted nature of the Asian metropolis, the book utilizes a combination of archival materials, public data sources, field observations and documentation, analytical drawings, models, and maps.

Gray Kochhar-Lindgren, Urban Arabesques: Philosophy, Hong Kong, Transversality (2020, Rowman & Littlefield International: New Critical Humanities Series)
Urban Arabesques examines philosophy as an event of the city and the city as an event of philosophy and how the intertwining of the two generates an urban imaginary. This critique-in-motion of creative figures and conceptual personae from (non) philosophy illuminates the emergence of sense in the city, shows how “transcendental empiricism” operates within it, and how the everyday life of the streets–the ordinariness of experience as well as the screen/projector of urban surfaces–uncovers new pathways for politics, experience, and relationalities. Using Hong Kong as the primary site of thinking yet recognizing that thinking incessantly moves beyond any particular location, the book opens up cities within the city. Traversing Hong Kong reveals how the corners, the money, the trees and the water are involved in philosophy. Combining the linguistic approach found in Heidegger and Derrida, with the more materialist analysis of Serres and Deleuze, the objective of this book is to retheorize the urban and its imaginary–its virtuality, irreality, phantasmicity–with an emphasis on signs, images and rhythms, resonating through philosophy, and beyond.

About the speakers:
Antony Dapiran is a Hong Kong-based writer and lawyer, and the author of the best-selling book City of Protest: A Recent History of Dissent in Hong Kong. His forthcoming book, City on Fire: The Fight for Hong Kong, will be published by Scribe in the new year. Antony has written and presented extensively on Hong Kong and Chinese politics, culture and business. His writing has appeared in The Atlantic, New Statesman, Foreign Policy, Quartz, Art Asia Pacific, Mekong Review and The Guardian, among many others. He is a regular guest on television and radio for the BBC and Australia’s ABC, and has provided comment and analysis to global media including The New York Times, Wall Street Journal, Financial Times and beyond. A fluent Mandarin speaker, Antony has resided between Hong Kong and Beijing for over twenty years.

Pang Laikwan teaches Cultural Studies at the Chinese University of Hong Kong. She has published widely in the general field of modern and contemporary Chinese cultures. Her research interests include film studies, visual studies, creativity, aesthetics, as well as cultural and political theories. She has turned her attentions to socialist China in recent years. The Art of Cloning (2017) examines the contents and the logic of the propaganda culture of the Cultural Revolution, and it analyzes the relations between subject formation and social formation. Her latest book, The Appearing Demos (2020), discusses the recent dissident movements in Hong Kong in dialogue with Hannah Arendt’s political theories.

Eunice Seng is Associate Professor and Chair of the Departmental Research Postgraduate Committee in Architecture at the University of Hong Kong. She holds a Bachelor of Arts in Architectural Studies from the National University of Singapore, a Master of Architecture from Princeton University and a PhD from Columbia University. Her work explores various disciplinary intersections and questions of agency in architecture. Her research interests include the histories and theories of modernity and modernism; domesticity, housing and the metropolis; post-colonialism and politics of power; utopias, artefacts and their cultural representations.

Gray Kochhar-Lindgren is Professor & Director of the Common Core at the University of Hong Kong (https://commoncore.hku.hk/). A Fulbright Scholar and recipient of the UGC and HKU Outstanding Teaching Awards (Teams), he has also taught in Switzerland, Germany, and the United States. After initiating GLADE (Global Liberal Arts Design Experiments) in 2017, he is now co-designing, with students and colleagues, Critical Zones: Gender, Cities, and Well-Being and The Passion Project: Creating Work You Love. His most recent book is Urban Arabesques: Philosophy, Hong Kong, Transversality (2020, Rowman & Littlefield International) and he is currently working on Noir: Thought, Art, and Ecology; Pinxtos: Essays & Aphorisms; and a series of short fictions under the title After Magritte.