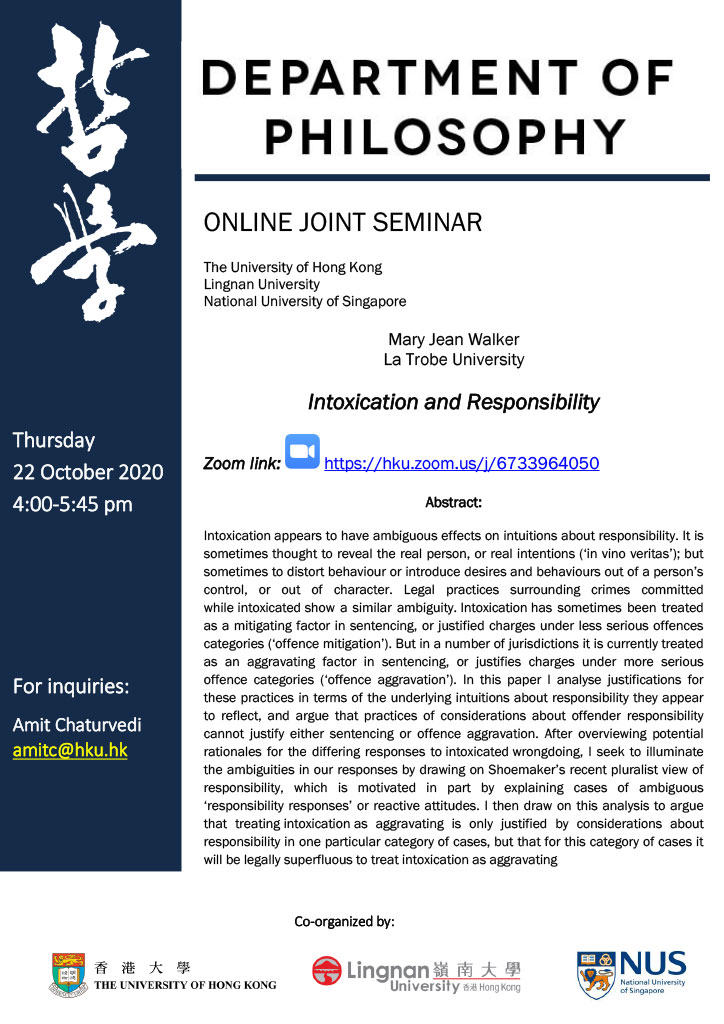 Abstract:
Intoxication appears to have ambiguous effects on intuitions about responsibility. It is sometimes thought to reveal the real person, or real intentions (‘in vino veritas’); but sometimes to distort behaviour or introduce desires and behaviours out of a person’s control, or out of character. Legal practices surrounding crimes committed while intoxicated show a similar ambiguity. Intoxication has sometimes been treated as a mitigating factor in sentencing, or justified charges under less serious offences categories (‘offence mitigation’). But in a number of jurisdictions it is currently treated as an aggravating factor in sentencing, or justifies charges under more serious offence categories (‘offence aggravation’). In this paper I analyse justifications for these practices in terms of the underlying intuitions about responsibility they appear to reflect, and argue that practices of considerations about offender responsibility cannot justify either sentencing or offence aggravation. After overviewing potential rationales for the differing responses to intoxicated wrongdoing, I seek to illuminate the ambiguities in our responses by drawing on Shoemaker’s recent pluralist view of responsibility, which is motivated in part by explaining cases of ambiguous ‘responsibility responses’ or reactive attitudes. I then draw on this analysis to argue that treating intoxication as aggravating is only justified by considerations about responsibility in one particular category of cases, but that for this category of cases it will be legally superfluous to treat intoxication as aggravating