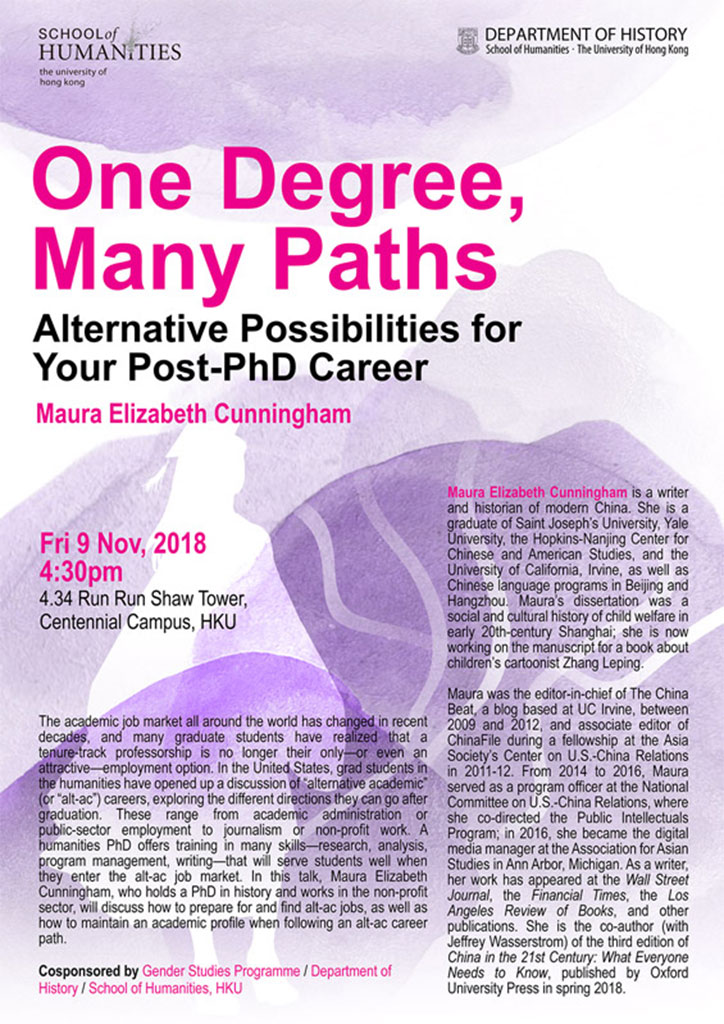 One Degree, Many Paths: Alternative Possibilities for Your Post-PhD Career

The academic job market all around the world has changed in recent decades, and many graduate students have realized that a tenure-track professorship is no longer their only—or even an attractive—employment option. In the United States, grad students in the humanities have opened up a discussion of “alternative academic” (or “alt-ac”) careers, exploring the different directions they can go after graduation. These range from academic administration or public-sector employment to journalism or non-profit work. A humanities PhD offers training in many skills—research, analysis, program management, writing—that will serve students well when they enter the alt-ac job market. In this talk, Maura Elizabeth Cunningham, who holds a PhD in history and works in the non-profit sector, will discuss how to prepare for and find alt-ac jobs, as well as how to maintain an academic profile when following an alt-ac career path.

Maura Elizabeth Cunningham is a writer and historian of modern China. She is a graduate of Saint Joseph’s University (B.A., 2004), Yale University (M.A., 2006), the Hopkins-Nanjing Center for Chinese and American Studies (graduate certificate, 2008), and the University of California, Irvine (Ph.D., 2014), as well as Chinese language programs in Beijing and Hangzhou. Maura’s dissertation was a social and cultural history of child welfare in early 20th-century Shanghai; she is now working on the manuscript for a book about children’s cartoonist Zhang Leping.

Maura was the editor-in-chief of The China Beat, a blog based at UC Irvine, between 2009 and 2012, and associate editor of ChinaFile during a fellowship at the Asia Society’s Center on U.S.-China Relations in 2011-12. From 2014 to 2016, Maura served as a program officer at the National Committee on U.S.-China Relations, where she co-directed the Public Intellectuals Program; in 2016, she became the digital media manager at the Association for Asian Studies in Ann Arbor, Michigan. As a writer, her work has appeared at the Wall Street Journal, the Financial Times, the Los Angeles Review of Books, and other publications. She is the co-author (with Jeffrey Wasserstrom) of the third edition of China in the 21st Century: What Everyone Needs to Know, published by Oxford University Press in spring 2018.