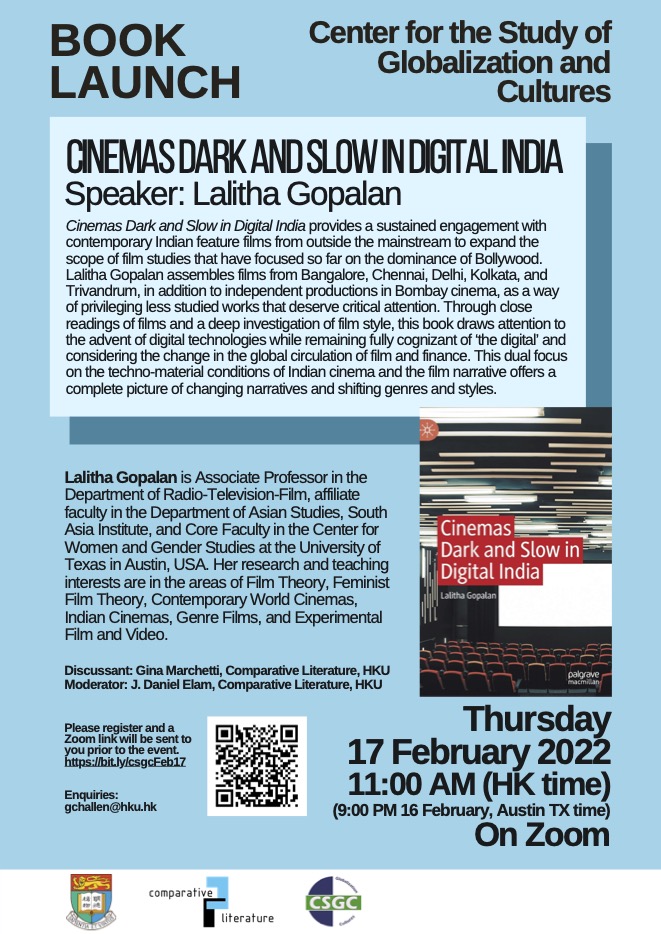 Lalitha Gopalan, Associate Professor in the Department of Radio-Television-Film, University of Texas in Austin, USA

“Cinemas Dark and Slow in Digital India” provides a sustained engagement with contemporary Indian feature films from outside the mainstream to expand the scope of film studies that have focused so far on the dominance of Bollywood. Lalitha Gopalan assembles films from Bangalore, Chennai, Delhi, Kolkata, and Trivandrum, in addition to independent productions in Bombay cinema, as a way of privileging less studied works that deserve critical attention. Through close readings of films and a deep investigation of film style, this book draws attention to the advent of digital technologies while remaining fully cognizant of ‘the digital’ and considering the change in the global circulation of film and finance. This dual focus on the techno-material conditions of Indian cinema and the film narrative offers a complete picture of changing narratives and shifting genres and styles.

Lalitha Gopalan is Associate Professor in the Department of Radio-Television-Film, affiliate faculty in the Department of Asian Studies, South Asia Institute, and Core Faculty in the Center for Women and Gender Studies at the University of Texas in Austin, USA. Her research and teaching interests are in the areas of Film Theory, Feminist Film Theory, Contemporary World Cinemas, Indian Cinemas, Genre Films, and Experimental Film and Video. Essays and books written by her include “Cinemas Dark and Slow in Digital India” (Palgrave Macmillan, 2021; Orient Blackswan 2021), “Cinema of Interruptions: Action Genres in Contemporary Indian Cinema” (London: BFI Publishing, 2002) and “Bombay” (London: BFI Modern Classics, 2005); and the edited volume “The Cinema of India” (London: Wallflower Press, 2010).